Oops! Seems I forgot this all-important announcement in the rush of preparations for Maker Faire!

Re:load v2 is now in stock and shipping! The price is the same as ever, but v2 has a lot of improvements over v1:

One of the more popular items at our booth at ECMMF yesterday was the new Circuit Patterns Trading Cards. This is an idea I’ve been working on for a little while. Each card has a circuit diagram and a short description of a common circuit design pattern. Topics covered include analog, digital, and power electronics. They were hugely popular at the faire, and I even had people asking if they could buy whole decks. 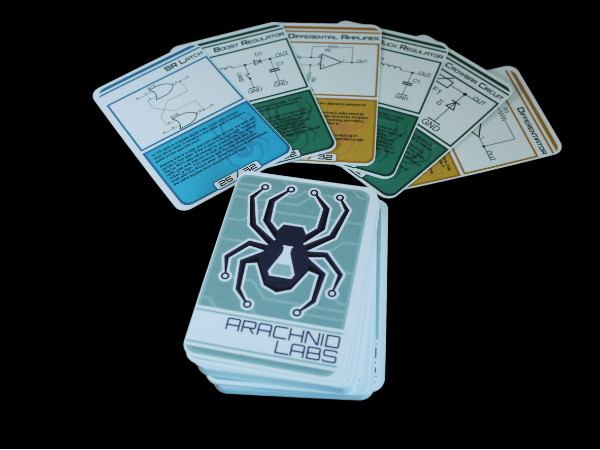 There’s 32 cards in total, and from now on each kit we ship out will include one. If you don’t want to have to buy 130 kits to get the whole set, you can now buy a deck for just $10.

If you’ve got errata, ideas for improving them, or you’ve come up with something interesting to do with them (snap? top trumps?), let us know!

Thanks to everyone who visited our booth!

Yesterday was the Elephant and Castle Mini Maker Faire, and it was a blast! Thanks to everyone who showed up and said hi.

The new Circuit Patterns Trading Cards were well received - so much so I’m going to be offering whole packs for sale on Tindie in the very near future. Minimatrix was also a big hit - and if you’re one of the people who wanted one, add yourself to the notification list here and you’ll get an email when they’re ready to go, in about a week.

If you want to get in touch, you can email me at [email protected].

Arachnid Labs at the Elephant and Castle Mini Maker Faire

Arachnid Labs is going to be at the Elephant and Castle Mini Maker Faire! This is our first event of any sort, so it’ll be an interesting experience. While there, I’ll be showing off and selling Re:load and Minimatrix, as well as talking to people about maker culture, and my experiences turning a hobby into a business. Also, there will be Candy. I promise.

I’ll also be stocking some of the kits from Electric Laboratory.

Finally, I’ve been working on a cool little giveaway to include in future kits - something to top the mix-and-match robots I already include - and I’ll be showing it off and giving it away for the first time at the Maker Faire. Come see! 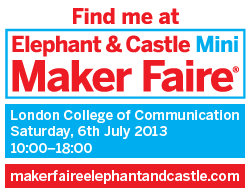 Now that the test units have arrived, and I’ve assembled and tested some, I’m happy to announce that Re:load 2 is ready to go! 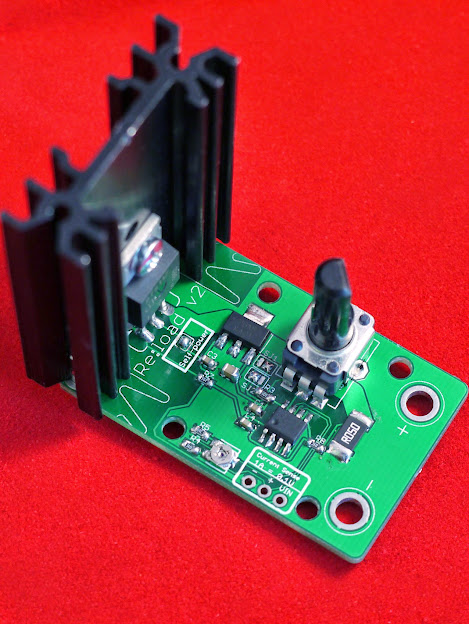 Re:load 2 is now available for preorder! See this post for details.

Re:load, Arachnid Labs’ DC dummy load project, has been hugely - and somewhat unexpectedly - popular. When I first listed it, I expected to get 10, maybe even 20 preorders; instead there were over 100. Since then, it’s continued to sell well, and we’re now nearly out of kits - the regular Re:load just sold out, and stock for Epic Re:loads is almost as scarce.

Clearly the time for a new run has arrived, and what better time to make some improvements? The basic premise and design of the Re:load has proven to be fundamentally sound, but there’s always a few improvements that can be made. I’ve taken the best suggestions and ideas from the community along with a few of my own, and put them together when designing version 2. I recently decided to invest in a Solder Paste Dispenser for the lab. The unit I settled on was the same one as Dangerous Prototypes bought, the PE-983A. I got mine from this AliExpress listing.

One thing that’s dissuaded me from buying a solder paste dispenser for so long is that I’m really not keen on a loud and bulky compressor in my workshop area, and I don’t want to spend several times the cost of the dispenser on a small and/or quiet compressor. I’d considered using an airbrush compressor, since they tend to be both quiet and small, but there was scant information on whether or not the smaller working pressure of such a compressor - typically 3 to 4 bar - would be sufficient for solder paste dispensing.

Another idea that occurred to me was using tanks of compressed gas. In theory, they ought to last a very long time, since the dispenser uses very little, and working pressure shouldn’t be an issue. There’s very little information out there on what sort of connection the dispenser uses for compressed air, though, and if you’re new to compressed air fittings like me, there’s a bewildering plethora of options out there. I decided to take the plunge and see what I could figure out anyway, with the help of fellow London Hackspace member artag, to whom I am eternally grateful.

Recently, diyourfaceoff, a fellow Tindie seller, listed a headphone amplifier kit on Tindie. As an owner of a moderately nice pair of headphones, I thought it’d be interesting to pick one up.

After pledging, however, and having done a lot more research about headphone amp design, it became apparent that maybe the ultra-simple CMOY design that this kit is based on wasn’t entirely up to scratch. As part of my research, I got turned on to another open source amp design, the Objective2 headphone amplifier. There’s a pile of resources at that link, including design discussions about the O2 design and other common designs like the CMOY - well worth a look. I particularly like NwAvGuy’s emphasis on objective measurements - no fuzzy audiophile nonsense here. While waiting for diyourfaceoff’s kit to arrive, I ordered and built an O2 kit from Head ‘n’ HiFi. When my CMOY kit arrived too, it seemed like it was about time to do a review and comparison.

The PSoC 4 Pioneer and the Loki

Recently, Cypress released a new range of processors, the PSoC 4, and a new development kit for them, the Pioneer. The PSoC 4 is Cypress’s new line of low power configurable microprocessors. They’re based on the Arm Cortex M0 architecture, and have much more basic analog and digital capabilities than the 3 and 5, but still retain the PSoC’s incredible reconfigurability. The pioneer is an Arduino clone based on the PSoC 4 processor; it’s got onboard program and debug capabilities using an onboard PSoC 5(!) configured for interactive debugging. The whole board sells for $30 US.

A lot of people have been asking me about the Loki and my plans for it, especially in view of the release of the Pioneer. This is something I’ve been giving a lot of thought to. The Pioneer has a lot of advantages - it’s made by Cypress, it’s at a price point I can’t match with the Loki, and it has onboard debugging, something I wasn’t able to build into the Loki at a reasonable price. Whilst the Pioneer lacks Loki’s very cool and flexible expansion system, it’s able to take advantage of the entire ecosystem of existing Arduino shields out there.

Loki could still have a very viable niche as a ‘big brother’ to the Pioneer, since the PSoC 5 is so much more capable than the 4. I’m considering releasing it with this in mind - possibly redesigned to fit an Arduino Mega / Due form factor to take best advantage of the Arduino ecosystem and to provide a simple upgrade path. Sadly, this would mean giving up on the Loki’s expansion system and the flexibility that grants.

In the short term, however, I’ve decided to put Loki on hold while I see how the Pioneer pans out, and to give me time to work on other projects. Keep an eye out for more progress in a little while. In the meantime, though, I do have another very cool project that uses the PSoC 5 in the pipeline - expect an announcement on that in the next few days!